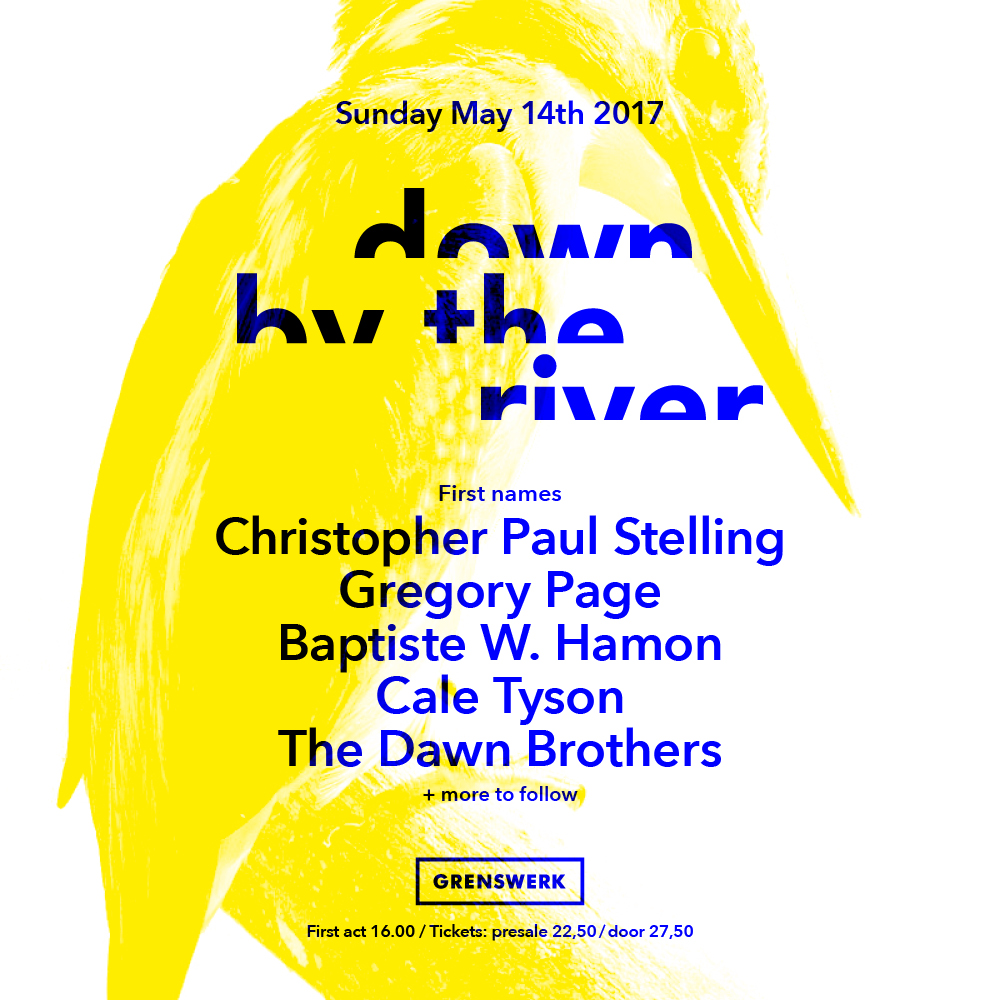 First five names for Down By The River

Christopher Paul Stelling and Gregory Page are the first big names for the third edition of the roots- and americana festival Down By The River in Poppodium Grenswerk. Down By The River takes place on Sunday 14th of May. The festival announces the first five names today. Also announced are Baptiste W. Hamon, Cale Tyson and The Dawn Brothers.

Down By The River is named after a song by Neil Young. The festival is located right at the banks of the Maas, the river that has been flowing through Venlo for centuries. Down By The River focusses on fresh and renewing americana and rootsmusic. Last year the second edition took place with ten bands spreaded over four stages in Poppodium Grenswerk. Tickets are on sale now!

Christopher Paul Stelling Christopher Paul Stelling is not a stranger in Venlo. He performed at the Zomerparkfeest before and gave a stunning show last year in Take Five. Where he normally travels the world solo he takes a band this time, a bassist and a fiddle player. This singer-songwriter from New York combines old blues with Americana and folk.

Gregory Page Born and raised Londoner Gregory Page moved to the Californian sun at an early stage. He started writing songs here that eventually took him across the world. His mix of jazz, folk and Americana perfectly outlines his beautiful stories, which Page tells outstandingly. Page tours with band. His new album is due out in spring.

Baptiste W. Hamon Americana chansons, that's how you can describe the songs Baptiste W. Hamon writes. The Paris singer-songwriter with lyrics in his mother tongue. American country and French folkmusic mixed up. Hamon is inspired by American singer-songwriter such as Townes van Zandt and Leonard Cohen. Hamon released his debut in 2016 and performed at Eurosonic/Noorderslag this year.

Cale Tyson The young Cale Tyson brings genuine country to Down By The River. This talented singer-songwriter from Nashville, Tennessee grew up in Forth Worth, Texas. The place where folk-icon Townes van Zandt hails from too. And you can hear this in the raw country song this young fellow writes. Old school country for the new generation.

The Dawn Brothers These guys from The Netherlands like be inspired by bands as CCR and The Band. Raw, energetic country-boogie that perfectly works live on stage. Their debut 'Staying Out Late' is due out March 23rd and is produced by no less that Pablo van der Poel (DeWolff)